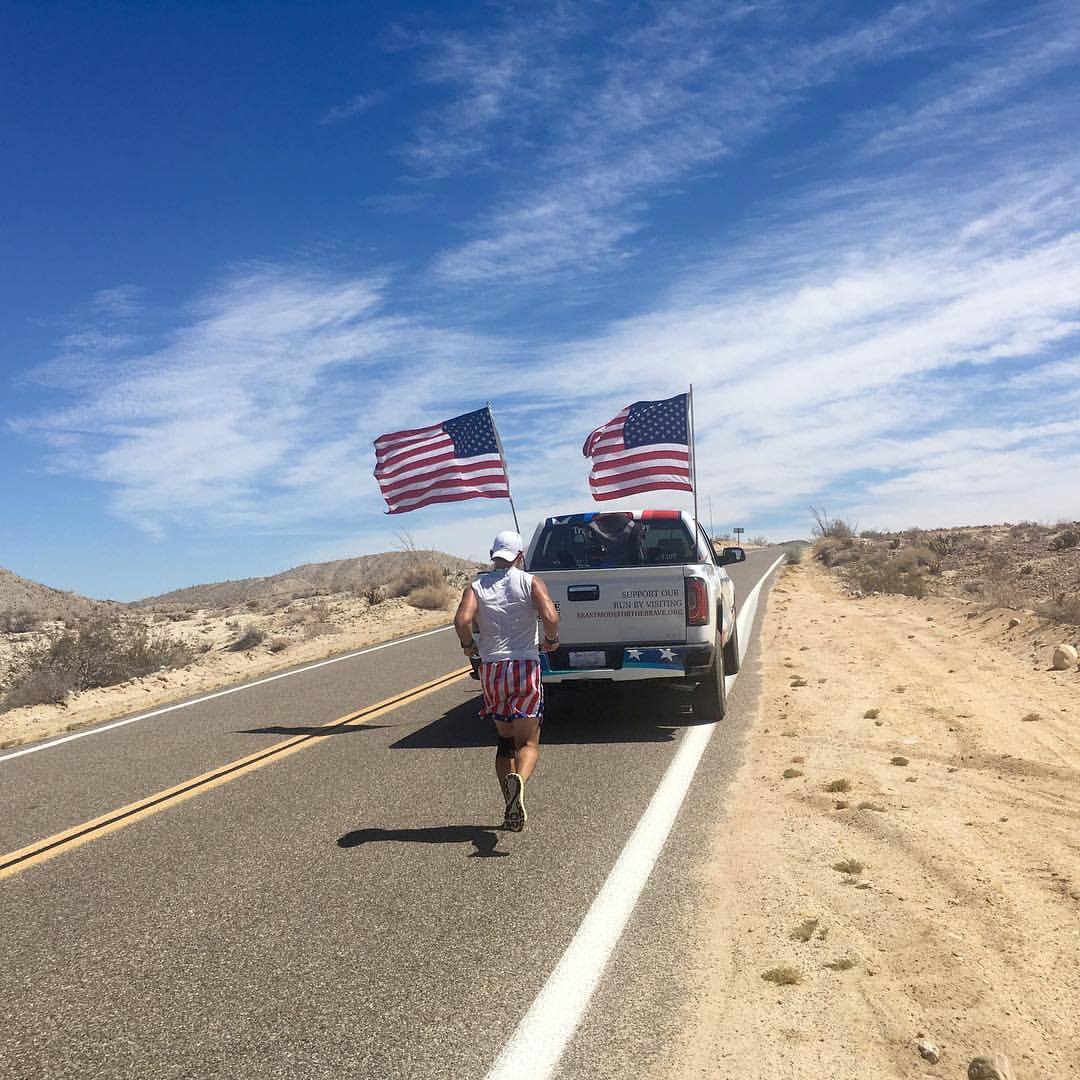 We love a client with a great story. And this one didn't dissapoint...

We're honored to have helped BeastMode for the Brave out with a truck wrap and RV decal (which is actually a giant magnet, pretty cool). Even though it's a small contribution, we hope the wraps will help George get his message out to the masses loud and clear! The full article below was sourced from ESPN.

SAN DIEGO -- On Sunday morning, Sept. 11, George Chmiel will be surrounded by well-wishers on the deck of the decommissioned aircraft carrier Midway. There will be music, a few guest speakers and plenty of pomp for a grand sendoff.

Then Chmiel will run through a special arch, down the ship's ladders and out to the streets, escorted by police and followed by a thundering herd of supportive runners as he makes his way east, toward Arizona.

Slowly, the runners will peel off. The herd will disappear.

"There's going to be a moment when I look around, and I'm going to be in the desert like, 'What did I get myself into?'" he said, laughing.

Chmiel, 35, is used to pushing himself to extremes. He's an experienced ultrarunner who has completed grueling, multiday races through the remote, inhospitable wilds of the Sahara, Antarctica and Australia. He's used to fighting through pain and tapping into reserves of resolve. He recalls being terrified while running alone at night through the Aussie Outback, scared to death of snakes and the crocodile-infested river he'd have to cross.

"My heart rate was jacked," he said. "It kept me running faster."

But when Chmiel (pronounced shimmel) steps off the Midway, it will be the start of a much bigger challenge: a 3,031-mile run from San Diego to New York City, where he plans to arrive Nov. 11, Veterans Day. That's an average of more than 50 miles a day for 60 days. It's a physical, mental and logistical challenge unlike any he has done before.

The reason he's doing it is to draw attention to the needs of military veterans and to raise funds for the Guardian For Heroes Foundation, which Chris Kyle, the late Navy SEAL of "American Sniper" fame, helped set up.

While many others have run across the continent, Chmiel is doing it in a very public way, with fundraising fun runs, concerts and events scheduled along the route. He wants people to know he's coming as he chugs through Arizona, New Mexico and Texas (including Kyle's hometown of Midlothian), then through Arkansas, Tennessee, Virginia, Washington D.C., Maryland, Pennsylvania and New Jersey with a finish at Ground Zero in Manhattan.

His goal is to raise at least $1 million. It's not that he's a veteran or from a military family or has lost a friend in Iraq or Afghanistan. He has simply read about how hard it is for veterans to adjust back to civilian life. He decided to help by raising money for the foundation, which helps combat veterans cope and thrive through fitness programs and life coaching.

He hopes it's one small way a divided America can come together.

"You want a shining example for all of us to get behind, it's our vets," he said. "I don't think it can be solved at the government or military level. I think us civilians can do more. That's what this is."

Running across America isn't new, and it's become increasingly more common the past decade. Some of the action from just this year:

On Aug. 20, 93-year-old Ernie Andrus, a World War II vet, successfully completed his almost three-year quest to run from San Diego to an island off the coast of southern Georgia.

On Sept. 12, Pete Kostelnick, a two-time champion of the 135-mile Badwater ultramarathon in Death Valley, California, will begin his mission to run from San Francisco to New York to break the fastest known crossing time of 46 days, set in 1980.

Ultrarunner Adam Kimble set out from Huntington Beach, California, on Feb. 15 to break that mark but was slowed by injury. Still, he crossed the U.S. in 60 days. A British runner also going after the mark, and accused by some of cheating, eventually quit because of an injury.

After starting on April 18, Jeremy Bradford ran from Los Angeles to New York, accompanied by his family in an RV, in 59 days, 10 hours, 4 minutes.

As the sport of ultrarunning has expanded -- the number of races longer than a marathon tripled from 2004 to 2014, according to Ultrarunning magazine -- so, too, has the desire to run coast to coast.

In 2002, Jim McCord of Cincinnati was the only person to run across the U.S., doing it to get attention and funding for diabetes research. Since then, he has kept track of cross-country attempts on his USA Crossers Facebook page.

He says about 300 runners have crossed the continent since the first known completion in 1909. Between 10 and 30 people per year now attempt it, he says, with a success rate of about 75 percent. Many, like Chmiel, run for a cause.

Chmiel grew up in Annapolis, Maryland, playing football, basketball, baseball, lacrosse and hockey. He never ran track, and never ran at all if he didn't have to. But after graduating from Boston College and going to work on Wall Street, he found running as a way to feed his competitive streak. He bypassed 5Ks and 10Ks for a full marathon as his first race, and he was such a novice he grabbed and ate Vaseline packs from the aid stations, thinking they were gels.

When his goddaughter Luci was afflicted with a rare birth-related disorder, a non-functioning pituitary gland, he decided to run marathons and eventually ultras to raise money for the Magic Foundation, which helps children overcome a variety of problems related to growth and health.

When he saw a video about a year ago with actor Dean Cain taking part in a fundraising effort for the Guardian For Heroes Foundation, through its BeastMode for the Brave Challenge, Chmiel contacted the organization and offered to run across America to help them.

Charla Heimer, a friend and fellow ultrarunner, ran the multiday race with Chmiel in Australia in 2010. She has seen how he doesn't quit, not even after getting heat stroke on the first day, and is confident he'll complete the upcoming challenge.

"Because he's doing it for other people, that's what will make him continue," Heimer said. "That's why I have no doubt."

Chmiel fractured a pelvic bone and suffered a double hernia from a fall in January doing a 100-mile run in Hong Kong. Surgery and recovery kept him from running for a couple of months. He began training in earnest in May and has been doing about 30 hours a week of cross training, strength work and running, about 80 miles a week. After seven years as an ultrarunner and more than a decade as a runner, in which time he has completed 21 marathons, he has a solid endurance base.

He says there's no way to train specifically for doing 3,000 miles.

"What am I supposed to do, go out and run 50 miles a day every day for a month so I can go do it for two months?" he said. "You're going to get injured."

He did, however, work on getting used to the desert heat he'll experience.

In late August, he ran 100 miles in Death Valley when temperatures during the day reached 110 degrees. Chmiel, with a friend in support, did five separate running sessions of 14, 11, 36, 13 and 26 miles over a 48-hour period so he could focus on the warm-up, cool-down, warm-up process. His run time was about 16 hours.

"I felt strong overall," he said. "So it was definitely a confidence builder."

He'll burn about 20,000 calories daily. Essentially, his body will need more fuel than he can consume.

"Much more," he said. "That's why you're going to have muscle wasting, and your body's going to deteriorate."

A company that produces balanced, pre-made organic meals of 600-700 calories each will provide microwaveable meals along the route. He'll eat six to seven a day. He'll also consume gels and nutritional supplements while he runs. That will be supplemented with anything he can get his hands on, including pasta feasts and restaurant stops.

"When you eat that much in a short period of time, everything starts tasting the same," he said. "You have to eat, and you're craving anything salty -- chips, macadamia nuts, pepperoni. Things high in fat, high in calories. Olive oil is great, shots of olive oil. Get tons of calories real quick. And pizza."

The toll and the care

Chmiel says he's not concerned about his cardio, but injuries are a given.

"It's the skeletal. It's the components," he said. "The engine's strong. I'm worried about the parts."

Fifty miles a will wreak havoc on his feet, ankles and knees. He has a surgically repaired ankle that will quickly start hurting. He has had five surgeries because of running injuries.

So he'll take care of his body during breaks with ice, chiropractic treatments, IV fluids, compression therapy and massages.

Chmiel plans to run 10-minute miles and resist the urge to push it. If he can keep it there, he says he can "go all day."

He wants to do about two-thirds of his miles at night but isn't yet sure how he'll break up each 24-hour cycle. Two sessions of 25 miles or three of 15-18 miles? Three sessions would give him an extra rest break but lessen the chance of getting a longer, deeper sleep.

Some cross-country runners go bare bones, with one person pushing a baby stroller of supplies, unsupported. This won't be that.

About 20 people have volunteered to help by driving, cooking, planning events and handling communications. A 32-foot RV will follow Chmiel, towing a trailer, giving the rolling expedition eight beds and two bathrooms. It will be expensive. To raise money for the charity, he's spending money.

He estimates the effort will cost about $200,000, with many people chipping in, but a good chunk is coming from him.

"It's not just sacrificing your body," he said. "I feel honored to be able to do it, talking about Chris' legacy, being a part of something bigger than you."

Chmiel plans to run for 60 of the 62 days from Sept. 11 to Veterans Day. On two days, he'll take whirlwind trips for weddings of good friends. He doesn't call them days off, because they'll be hectic. And because of the timing of the second wedding, he'll have to run 80 miles a day for five straight days to get back on pace.

Chmiel is one of just 150 people to ever have completed the 4Deserts series of seven-day, 155-mile wilderness races. He also has run multiple 100-mile ultras, completed Ironman Lake Placid in 2011 and been good enough to run the Boston Marathon in 2012, all to challenge himself and raise money for charities.

Now he's 3,031 miles and one fundraising goal from another conquest.

"This is my run for America and giving back," he said. "I've never DNF'd (did not finish) a race in my life, and I don't intend on starting now."

To see Chmiel's route, schedule of events, concerts and how to donate, or to follow his progress, go to beastmodeforthebrave.org/george-team.